admin
On Pocketnow Daily, new color ways for the Google Pixel 3 and 3 XL were just leaked. Leaks of the Galaxy A7 have just emerged and they feature triple cameras, following the previous rumors. Apple's iOS 12 and WatchOS 5 were released yesterday and are now available on iPhones, iPads and Apple Watches from the iPhone 5s, iPad Air going forward. OnePlus is working on OnePlus TV according to the company's CEO, we are not clear on what it consists but it is set for 2019. We end today's show with deals for the Amazon Limited Edition Halo Gray Essential Phone.
All this and more after the break.
Stories:
- How many colors will the Google Pixel 3 come in?
- Samsung will launch its first triple camera smartphone this year
- iOS 12 released today for iPhone 5s, iPad Air and later
- OnePlus to launch the OnePlus TV next year
- Amazon’s Halo Gray Essential Phone is just $310
#PocketnowDaily #GooglePixel3 #iOS12
Subscribe:
Follow us:
Graphics provided by: Motionvfx.com
About us:
Pocketnow has been a key source of mobile technology news and reviews since its establishment in 2000. With offices on three continents, Pocketnow offers round-the-clock coverage of the mobile technology landscape, from smartphones to tablets to wearables. We aim to be your number-one source for mobile tech news, reviews, comparisons, and commentary. If you love mobile as much as we do, be sure to subscribe!
[Video Title]
[Video URL]
Pocketnow 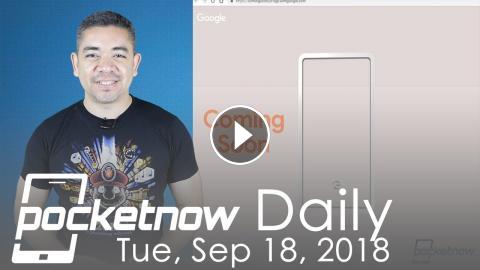 On Pocketnow Daily, new color ways for the Google Pixel 3 and 3 XL were just leaked. Leaks of the Galaxy A7 have just emerged and they feature triple ...