admin
Watch today's Pocketnow Daily as we talk about LG making the OLED panels for the Google Pixel 3 XL that will sadly have a notch. Then we talk about the launch of the LG V35 ThinQ on AT&T with a steep price tag. Apple just rolled out iOS 11.4 bringing new features for it's overpriced HomePod. Then we talk about the Galaxy S10 as we get confirmation that it will bring a fingerprint scanner embeded on the display. We end today's show talking about T-Mobile's deals for the Galaxy Note 8.
All this and more after the break.
Stories:
-T-Mobile’s Samsung Galaxy Note 8 gets $230 markdown to $720
-AT&T’s LG V35 ThinQ pre-orders start June 1 at a whopping $900
-iOS 11.4 featuring AirPlay 2 roll out today, HomePod spreads
-Galaxy S10 will have Qualcomm’s ultrasound in-display fingerprint sensor
-Supply chain sources affirm LG Display’s notched OLED panel on Pixel 3 XL
Subscribe:
Graphics provided by: Motionvfx.com
About us:
Pocketnow has been a key source of mobile technology news and reviews since its establishment in 2000. With offices on three continents, Pocketnow offers round-the-clock coverage of the mobile technology landscape, from smartphones to tablets to wearables. We aim to be your number-one source for mobile tech news, reviews, comparisons, and commentary. If you love mobile as much as we do, be sure to subscribe!
Follow us: 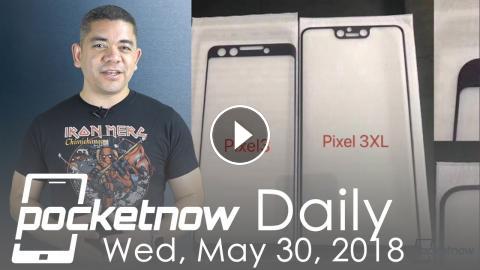 Watch today's Pocketnow Daily as we talk about LG making the OLED panels for the Google Pixel 3 XL that will sadly have a notch. Then we talk about th...