admin
- iPhones deals are cheaper on Swappa. iPhone X prices start at $589.
On Pocketnow Daily, we get new leaks on where to expect the Galaxy S10's selfie cameras. Xiaomi's CEO just teased that the company is working on a smartphone with a 48MP camera. Honor just teased their own smartphone with a 48MP camera that also brings a punch hole display. The Galaxy A8s is just official but was beat by Honor's device to being the first device with an Infinity O-like display. We end today's show with deals for the Razer Phone 2.
All this and more after the break.
Stories:
- Galaxy S10 display size leak hints three different models
- Xiaomi to introduce a 48-megapixel smartphone camera in January
- Honor View 20 includes a 48MP rear shooter and a camera hole in its display
- Samsung Galaxy A8s leaks before announcement, shows off huge punch hole
- Prices for the Razer Phone 2 start dropping at many retailers
#PocketnowDaily #GalaxyS10 #Xiaomi
Subscribe:
Follow us:
Graphics provided by: Motionvfx.com
About us:
Pocketnow has been a key source of mobile technology news and reviews since its establishment in 2000. With offices on three continents, Pocketnow offers round-the-clock coverage of the mobile technology landscape, from smartphones to tablets to wearables. We aim to be your number-one source for mobile tech news, reviews, comparisons, and commentary. If you love mobile as much as we do, be sure to subscribe!
[Video Title]
[Video URL]
Pocketnow 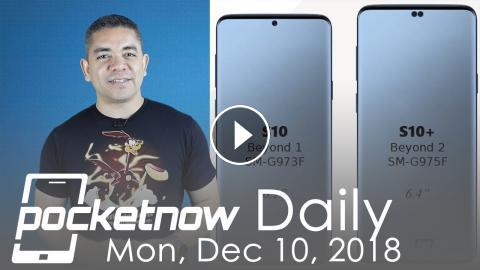 - iPhones deals are cheaper on Swappa. iPhone X prices start at $589.On Pocketnow Daily, we get new leaks on where to expect the Galaxy S10's selfie c...