admin
Stories:
- BlackBerry DTEK60 is officially official to ‘put the smart in the smartphone’
- That Daydream-separate Google VR headset is reportedly ‘advancing’ quite rapidly
- Google Pixel water resistance tested for an hour
- Samsung sending out battery limiter update to Galaxy Note 7 in Europe
- Latest round of Galaxy S8 (Edge) gossip includes up to 8GB RAM, 80 percent screen-to-body ratio
Watch today's Pocketnow Daily as we talk about the recent announcement of the new BlackBerry DTEK60. Then we discuss the future of Google's Daydream VR as we hear new technologies in the mix. The Google Pixel follows as we learn that there is a good deal of water resistance in its design. Samsung is next as the company continues to find ways to have Galaxy Note 7 customers turn off their devices. We end today's show talking about the Samsung Galaxy S8 edge, and the possible monster specifications to expect.
All this and more after the break.
Subscribe:
About us:
Pocketnow has been a key source of mobile technology news and reviews since its establishment in 2000. With offices on three continents, Pocketnow offers round-the-clock coverage of the mobile technology landscape, from smartphones to tablets to wearables. We aim to be your number-one source for mobile tech news, reviews, comparisons, and commentary. If you love mobile as much as we do, be sure to subscribe!
Follow us: 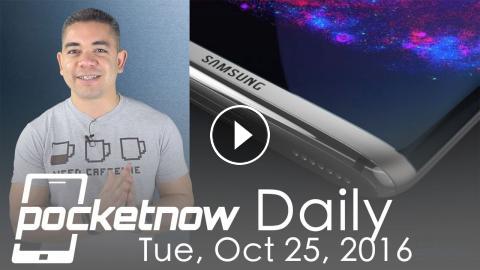 Stories:- BlackBerry DTEK60 is officially official to ‘put the smart in the smartphone’ - That Daydream-separate Google VR headset is reportedly ‘adva...