admin
Stories:
- Apple Town Hall: growth of the iPhone and cross-platform services
- HTC Vive manual gives us an early preview at getting set up with VR
- Leaked HTC One M10 pic appears to confirm a number of recent rumors
- Samsung Galaxy S7 and S7 Edge drop by FCC to reveal little we didn’t know already
- Latest LG G5 case designs offer closer glimpse at rear dual-camera layout
Watch today's Pocketnow Daily as we talk about the recent Apple Town Hall meeting, and what Tim Cook had to say about the future of the company. HTC follows as a Vive user manual that got leaked reveals what you need to use it. Then we discuss the leaked HTC One M10, and how it changes the company's current design language. The Samsung Galaxy S7 follows as we discover that it stopped by the FCC. We end today's show talking LG G5 case renders, and its new camera design.
All this and more after the break.
Subscribe:
About us:
Pocketnow has been a key source of mobile technology news and reviews since its establishment in 2000. With offices on three continents, Pocketnow offers round-the-clock coverage of the mobile technology landscape, from smartphones to tablets to wearables. We aim to be your number-one source for mobile tech news, reviews, comparisons, and commentary. If you love mobile as much as we do, be sure to subscribe!
Follow us: 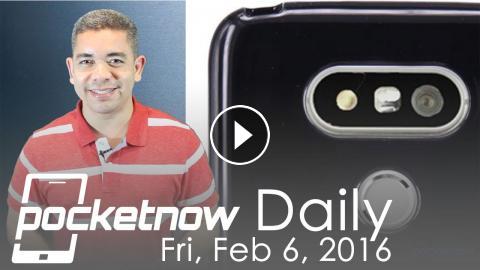 Stories:- Apple Town Hall: growth of the iPhone and cross-platform services - HTC Vive manual gives us an early preview at getting set up with VR - Le...