admin
Watch today's Pocketnow Daily as rumors claim that Samsung is already showing off its foldable Galaxy X. Then we talk about the Samsung Galaxy S9 and Galaxy S9+ as we hear that the battery might not bring any positive news for those wanting more endurance. The LG G7 is next, if there is any, as we hear that the company might cancel its plans to make the phone after all, while it reorganizes. ZTE is next as we hear that it'll launch a phone with true 5G in 2019. We end today's show talking about the HTC U11 EYE that just got announced.
All this and more after the break.
Stories:
- HTC U11 EYEs goes official with dual 5MP front cameras, 6-inch FHD+ screen, $500+ price
- ZTE 5G phone planned for 2019 as networks prepare to upgrade
- LG G7 development reportedly halted, March launch seems highly unlikely
- Samsung Galaxy S9 and S9+ battery size confirmed as identical to S8 and S8+
- Samsung privately showed off its latest stab at a foldable smartphone at CES 2018
Read more:
Lee más en Español:
Subscribe:
About us:
Pocketnow has been a key source of mobile technology news and reviews since its establishment in 2000. With offices on three continents, Pocketnow offers round-the-clock coverage of the mobile technology landscape, from smartphones to tablets to wearables. We aim to be your number-one source for mobile tech news, reviews, comparisons, and commentary. If you love mobile as much as we do, be sure to subscribe!
Follow us: 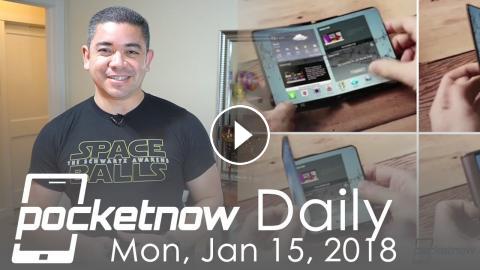 Watch today's Pocketnow Daily as rumors claim that Samsung is already showing off its foldable Galaxy X. Then we talk about the Samsung Galaxy S9 and ...