admin
On Pocketnow Daily, Huawei just released a teaser saying it is time to explore with a squared shape that hints the Mate 20 Pro's camera arrangement. A Galaxy Note 9 started smoking on an elevator in New York, and a lawsuit has been filed against Samsung. Apple's suppliers are worried that the iPhones won't sell as much to fulfill their Q4 expectations due to high prices. The AirPower Mat will reportedly be launched until next year as it's main manufacturing problems have been revealed. We end today's show with the Razer Phone 2's announcement that will happen this October 10th.
All this and more after the break.
Stories:
- Huawei Mate 20 Pro teaser confirms weird camera arrangement
- Galaxy Note 9 battery overheats, smokes out, now subject of lawsuit
- Apple suppliers concerned about high iPhone prices
- AirPower mats are overheating and may come with a different appearance
- Razer Phone 2 set to debut October 10
#PocketnowDaily #HuaweiMate20Pro #GalaxyNote9
Subscribe:
Follow us:
Graphics provided by: Motionvfx.com
About us:
Pocketnow has been a key source of mobile technology news and reviews since its establishment in 2000. With offices on three continents, Pocketnow offers round-the-clock coverage of the mobile technology landscape, from smartphones to tablets to wearables. We aim to be your number-one source for mobile tech news, reviews, comparisons, and commentary. If you love mobile as much as we do, be sure to subscribe!
[Video Title]
[Video URL]
Pocketnow 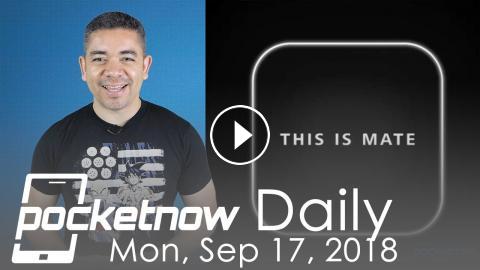 On Pocketnow Daily, Huawei just released a teaser saying it is time to explore with a squared shape that hints the Mate 20 Pro's camera arrangement. A...