admin
On Pocketnow Daily, some leaks of the OnePlus 6T just emerged and they look very real and no headphone jack is present. Some new renders of the Huawei Mate 20 Pro show off the notch and the new camera arrangement. Huawei went on record to say they are pretty confident that the Kirin 980 will outperform the A12 Bionic. Samsung just trademarked the 'Samsung Buds' that would reportedly work with Bixby. We end today's show with deals for the Galaxy Note 9 on eBay.
All this and more after the break.
Stories:
- First real life images of the new OnePlus 6T are here
- Huawei Mate 20 Pro renders confirm everything, leave nothing to imagination
- Huawei confident Kirin 980 bests Apple A12 Bionic chip in 7nm SoC war
- Samsung is preparing to deliver something new called ‘Samsung Buds’
- Lowest price ever on the Samsung Galaxy Note 9 128GB unlocked
#PocketnowDaily #OnePlus6T #Mate20Pro
Subscribe:
Follow us:
Graphics provided by: Motionvfx.com
About us:
Pocketnow has been a key source of mobile technology news and reviews since its establishment in 2000. With offices on three continents, Pocketnow offers round-the-clock coverage of the mobile technology landscape, from smartphones to tablets to wearables. We aim to be your number-one source for mobile tech news, reviews, comparisons, and commentary. If you love mobile as much as we do, be sure to subscribe!
[Video Title]
[Video URL]
Pocketnow 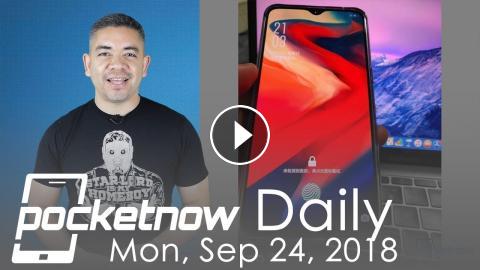 On Pocketnow Daily, some leaks of the OnePlus 6T just emerged and they look very real and no headphone jack is present. Some new renders of the Huawei...