admin
- Huawei Matebook X Pro: Open New Horizons
On Pocketnow Daily, we get new leaks of what could be OnePlus's 5G device. Apple just published some patents on iPhones using a touch sensitive back panel. Huawei will reach 200 million sales this Tuesday and could even beat Samsung by the end of next year. Honor is planning to launch a new smart watch powered by MediaTek. We end today's show with 2018 iPad deals on Amazon.
All this and more after the break.
Stories:
- Could this be the first OnePlus smartphone with 5G?
- Apple’s iPhone and AirPower get new features, well at least in patents
- Huawei approaching record smartphone shipments of 200 million in 2018
- Honor is preparing a MediaTek-based smartwatch
- Amazon has more and better iPad discounts right now
#PocketnowDaily #OnePlus7 #iPhoneXs
Subscribe:
Follow us:
Graphics provided by: Motionvfx.com
About us:
Pocketnow has been a key source of mobile technology news and reviews since its establishment in 2000. With offices on three continents, Pocketnow offers round-the-clock coverage of the mobile technology landscape, from smartphones to tablets to wearables. We aim to be your number-one source for mobile tech news, reviews, comparisons, and commentary. If you love mobile as much as we do, be sure to subscribe!
[Video Title]
[Video URL]
Pocketnow 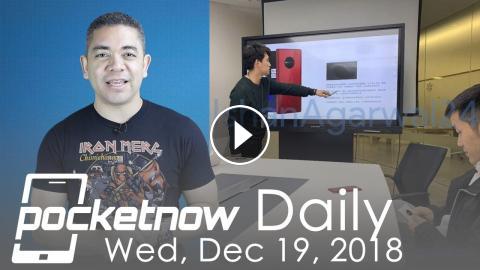