admin
Watch today's Pocketnow Daily as we talk about the news of an Apple Engineer getting fired over his daughter making a video with his iPhone X. Then we talk about the Google Pixel 2 XL and how it seems to have audio problems now. The OnePlus 5T follows as we get leaks of its front, and even teasers from its CEO. Microsoft is next with a patent that could rescue the headphone jack. We end today's show talking about the Nintendo Switch and how many units its sold.
All this and more after the break.
Stories:
- More than 7 million Nintendo Switch consoles sold in 7 months
- Carl Pei hints at OnePlus 5T portrait-taking abilities
- Half of the OnePlus 5T face is ev-leaked in crisp quality, and the bezel indeed looks thinner
- Microsoft patents a way to fit a 3.5mm headphone jack into less than 3.5mm of space
- Many Pixel 2 XL and a few Pixel 2 owners report new audio problems, fix coming soon
- Apple engineer fired after daughter gives video tour of iPhone X
Read more:
Lee más en Español:
Subscribe:
About us:
Pocketnow has been a key source of mobile technology news and reviews since its establishment in 2000. With offices on three continents, Pocketnow offers round-the-clock coverage of the mobile technology landscape, from smartphones to tablets to wearables. We aim to be your number-one source for mobile tech news, reviews, comparisons, and commentary. If you love mobile as much as we do, be sure to subscribe!
Follow us: 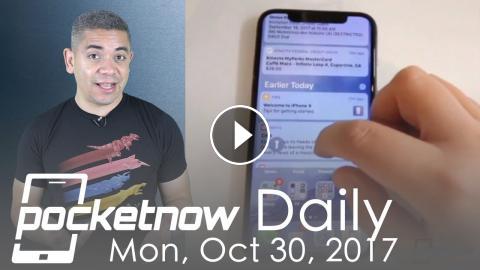 Watch today's Pocketnow Daily as we talk about the news of an Apple Engineer getting fired over his daughter making a video with his iPhone X. Then we...