admin
Stories:
- Apple goes official with September 9 event
- Samsung Pay now available in the US, but as a beta
- Upcoming Microsoft Lumia flagships, the Lumia 950 and 950XL, leaked in these renders
- Latest pic of new Moto 360 smartwatch reveals smaller size option (large, too)
- Possible iPhone 6s camera feature improvements get detailed
Watch today's Pocketnow Daily as we talk about Apple's official announcement of its September 9 iPhone 6s event. Then we talk about Samsung Pay and how it went live in the US. Then we focus on Microsoft's new Lumia flagships and some leaked renders. Then we talk about some new Moto 360 leaks, this time of the smaller variant. We end today's show talking about the new iPhone 6s and its camera improvements.
All this and more after the break.
Subscribe:
About us:
Pocketnow has been a key source of mobile technology news and reviews since its establishment in 2000. With offices on three continents, Pocketnow offers round-the-clock coverage of the mobile technology landscape, from smartphones to tablets to wearables. We aim to be your number-one source for mobile tech news, reviews, comparisons, and commentary. If you love mobile as much as we do, be sure to subscribe!
Follow us: 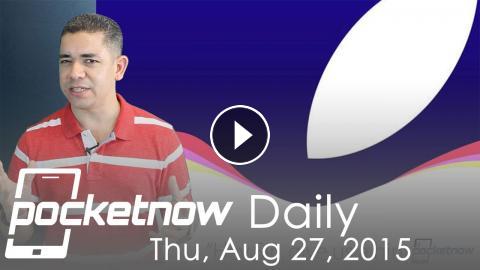 Stories:- Apple goes official with September 9 event - Samsung Pay now available in the US, but as a beta - Upcoming Microsoft Lumia flagships, the Lu...