admin
Read more:
- You can pre-order the Nokia 6 in glitzy copper from Amazon, but shipping starts in August
- HTC U11 mini? U11 Play? Desire 11? ‘Ocean Life’ mid-ranger with Edge Sense reportedly coming soon
- Samsung has Bixby smart speaker in the works, but the AI’s English voice progress is still slow
- Ev-leaked Moto X4 render provides clear, clean look at a very fashionable, curvy device
- Bloomberg adds to the growing pile of iPhone 8 with ‘3-D’ face scanner rumors
Watch today's Pocketnow Daily as we talk about the exclusive deals you can find on the Nokia 6 on Amazon. Then we talk about the HTC U11, mainly because there seems to be another variant in the works. Samsung follows as it seems that Bixby might evolve into a speaker, even if it can barely get English right. The we discuss the Moto X4 after Evan Blass uncovered its existence in renders. We end today's show talking about the iPhone 8 and how it might ditch Touch ID over something else.
All this and more after the break.
Subscribe:
About us:
Pocketnow has been a key source of mobile technology news and reviews since its establishment in 2000. With offices on three continents, Pocketnow offers round-the-clock coverage of the mobile technology landscape, from smartphones to tablets to wearables. We aim to be your number-one source for mobile tech news, reviews, comparisons, and commentary. If you love mobile as much as we do, be sure to subscribe!
Follow us: 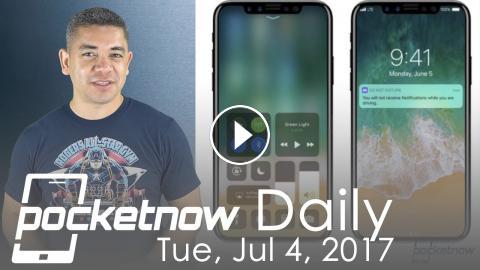