admin
Stories:
- Asus ZenFone 3 trinity teased on video ahead of Computex announcement
- Apple’s rash of updates include iTunes 12.4 to fix magically deleting songs [UPDATE]
- Moto G4 Play also unveiled with little fanfare, 5-inch display, 8MP camera
- Moto G4 and G4 Plus go official with large screens, powerful internals, low prices
- Blass: Moto X becoming Moto Z
- OnePlus 3 rendered in all its HTC-inspired glory, said to only pack 3,000 mAh cell
Watch today's Pocketnow Daily as we talk about the recent teasers for the Asus ZenFone 3. Then we discuss Apple's launch of iTunes 12.4, iOS 9.3.2, and the precautions that you should take. Then we discuss the Moto G4, Moto G4 Play and Moto G4 Plus that just got announced. The Moto X follows as famous tipster claims its name will now be Moto Z. We end today's show talking about the OnePlus 3 and its new leaked design.
All this and more after the break.
Subscribe:
About us:
Pocketnow has been a key source of mobile technology news and reviews since its establishment in 2000. With offices on three continents, Pocketnow offers round-the-clock coverage of the mobile technology landscape, from smartphones to tablets to wearables. We aim to be your number-one source for mobile tech news, reviews, comparisons, and commentary. If you love mobile as much as we do, be sure to subscribe!
Follow us: 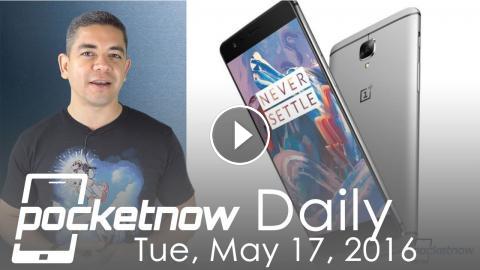