admin
Watch today's Pocketnow Daily as we get sources claiming how many units Apple is currently able to produce of the iPhone X. Then we talk about the Huawei Mate 10 and some bogus leaks on one hand, and others regarding its version of Android. The Essential Phone follows as it now starts shipping in white to providers. Samsung is next as the Gear Sport and Gear IconX 2018 now have a date and a price. We end today's show talking about the winners of the giveaway for the LG tickets to the Ne York Film Festival.
All this and more after the break.
Stories:
- Win two tickets to LG’s event at the New York Film Festival! (WINNER)
- Samsung Gear Sport and Gear IconX 2018 coming October 27
- Pure White Essential Phone starts shipping at last from OEM, Amazon, Best Buy and Sprint
- Huawei Mate 10 confirmed on social media to run Android Oreo out the box
- Even more Huawei Mate 10 Pro renders surface, including a promo image also starring a pen
-
Read more:
Lee más en Español:
Subscribe:
About us:
Pocketnow has been a key source of mobile technology news and reviews since its establishment in 2000. With offices on three continents, Pocketnow offers round-the-clock coverage of the mobile technology landscape, from smartphones to tablets to wearables. We aim to be your number-one source for mobile tech news, reviews, comparisons, and commentary. If you love mobile as much as we do, be sure to subscribe!
Follow us: 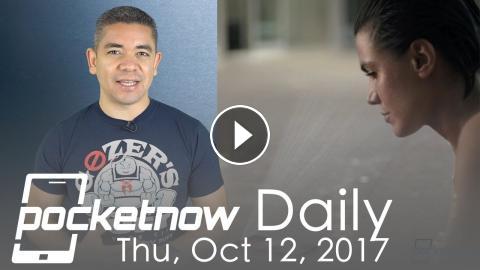 Watch today's Pocketnow Daily as we get sources claiming how many units Apple is currently able to produce of the iPhone X. Then we talk about the Hua...