admin
Watch today's Pocketnow Daily as we talk about the iPhone X and how it might outsell the iPhone 8, though we're not sure how long it'll take Apple to build enough of them. We also discuss some leaked images of the Huawei Mate 10 Pro and Mate 10, in addition to the spec sheet. Samsung follows as there are leaks of a Windows Mixed Reality headset in the works. Satya Nadella follows as he discusses why the Nokia deal went south in his recent book. We end today's show talking about Bill Gates and what phone he's currently using.
All this and more after the break.
Stories:
- Microsoft’s Nokia acquisition picked apart by Nadella in new book
- Bill Gates recently switched to an unnamed Android phone with ‘a lot of Microsoft software’
- Huawei Mate 10 and Mate 10 Pro design and features possibly revealed in leaked promo
- High-quality images depicting mystery Samsung Windows Mixed Reality headset randomly show up
- iPhone X supply squeeze exacerbated as demand shifts from iPhone 8
Read more:
Lee más en Español:
Subscribe:
About us:
Pocketnow has been a key source of mobile technology news and reviews since its establishment in 2000. With offices on three continents, Pocketnow offers round-the-clock coverage of the mobile technology landscape, from smartphones to tablets to wearables. We aim to be your number-one source for mobile tech news, reviews, comparisons, and commentary. If you love mobile as much as we do, be sure to subscribe!
Follow us: 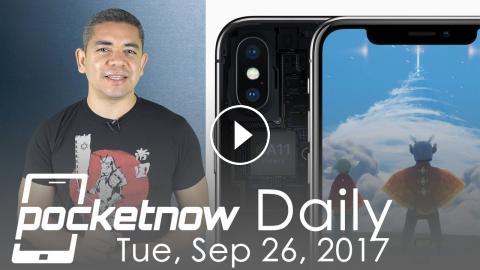 Watch today's Pocketnow Daily as we talk about the iPhone X and how it might outsell the iPhone 8, though we're not sure how long it'll take Apple to ...