admin
T-shirts provided by RIPT. Learn more about it here:
Stories:
- HTC U, aka Ocean, tipped for early May global release with Edge Sense and SD835
- It’s still not wise to count out an April launch for next-gen 10.5-inch iPad Pro with slim bezels
- Analyst predicts LTE-capable Apple Watch Series 3, no Lightning change on iPhone 8
- 10nm chip production rumored to hobble Galaxy S8 supply
- Samsung rules out refurbished Galaxy Note 7 US release, name change possible elsewhere
Watch today's Pocketnow Daily as we talk about the possible new HTC U device that will follow the HTC 10. Then we talk about the next generation iPad Pro, which we hear is actually still going to happen. The Apple Watch Series 3 follows as we learn that it might get LTE, and that the iPhone X will not change in a few things. Then we talk about the Samsung Galaxy S8 and how it might run into some production delays. We end today´s show talking about the possible revival of the Samsung Galaxy Note 7.
All this and more after the break.
Subscribe:
About us:
Pocketnow has been a key source of mobile technology news and reviews since its establishment in 2000. With offices on three continents, Pocketnow offers round-the-clock coverage of the mobile technology landscape, from smartphones to tablets to wearables. We aim to be your number-one source for mobile tech news, reviews, comparisons, and commentary. If you love mobile as much as we do, be sure to subscribe!
Follow us: 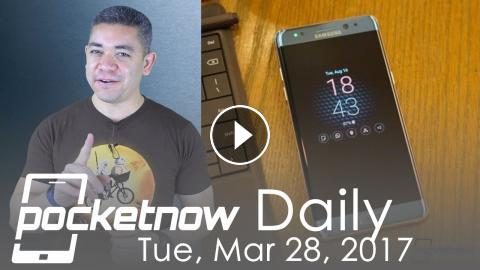 T-shirts provided by RIPT. Learn more about it here: Stories:- HTC U, aka Ocean, tipped for early May global release with Edge Sense and SD835 - It’s ...