admin
Stories:
- Best Buy now charges a measly $5 a month for Moto Z Droid on device payments ($120 total)
- TCL vows the BlackBerry ‘brand legacy will live on’, more details at CES 2017
- Uber sometimes tracks your iPhone location long after closing the app, blames iOS for it
- Low TSMC 10nm chip yields could ‘disrupt’ early 2017 iPad release schedule
- Samsung may have considered stylus-toting Galaxy S8 Plus, 6-inch screen now top choice
Watch today's Pocketnow Daily as we talk about some of the crazy discounts for the Moto Z Droid. Then we discuss how TCL plans to keep the BlackBerry legacy alive. Uber is next as the company claims some crazy facts about why it keeps tracking you on iOS. then we talk about TSMC and how its low yields might delay the next-generation iPad. We end today's show talking about Samsung and a possible Galaxy S8 Plus with an S Pen in the works.
All this and more after the break.
Subscribe:
About us:
Pocketnow has been a key source of mobile technology news and reviews since its establishment in 2000. With offices on three continents, Pocketnow offers round-the-clock coverage of the mobile technology landscape, from smartphones to tablets to wearables. We aim to be your number-one source for mobile tech news, reviews, comparisons, and commentary. If you love mobile as much as we do, be sure to subscribe!
Follow us: 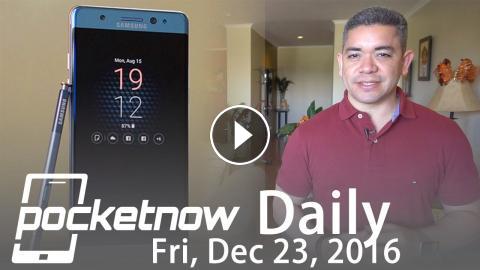