admin
On Pocketnow Daily, One UI's beta just revealed that we will be getting a new feature called Bright Night in the Galaxy S10's camera. According to analysts we will get a refresh to the iPad Mini as well as a 10in iPad next year. DxO Mark just released their Pixel 3 review and it ranked the same as the iPhone Xr. AT&T will be changing their LTE indicator to 5G E indicating 5G Evolution. We end today's show with deals for the Huawei Mate 10 Pro.
All this and more after the break.
Stories:
- Galaxy S10 to have minimal bezels, special Bright Night camera mode
- Apple could bring us a new 10” iPad and a new iPad mini in 2019
- DxOMark issues mobile scores of 101 to Pixel 3, 98 to OnePlus 6T
- AT&T rebrands some LTE as “5G Evolution” in network icon on its phones
- Huawei Mate 10 Pro can be a nice present with its new discount
#PocketnowDaily #GalaxyS10 #iPadMini
Subscribe:
Follow us:
Graphics provided by: Motionvfx.com
About us:
Pocketnow has been a key source of mobile technology news and reviews since its establishment in 2000. With offices on three continents, Pocketnow offers round-the-clock coverage of the mobile technology landscape, from smartphones to tablets to wearables. We aim to be your number-one source for mobile tech news, reviews, comparisons, and commentary. If you love mobile as much as we do, be sure to subscribe!
[Video Title]
[Video URL]
Pocketnow 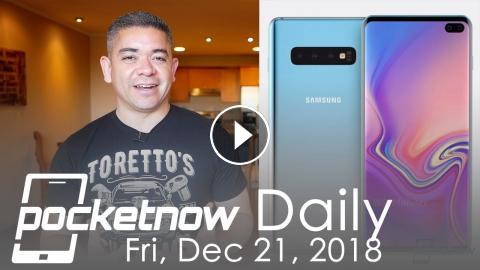 On Pocketnow Daily, One UI's beta just revealed that we will be getting a new feature called Bright Night in the Galaxy S10's camera. According to ana...