admin
Stories:
- John Legere promises exciting news for next week, says Apple Music will be joining Music Freedom soon
- OnePlus CEO spurs rumors of metal-bodied OnePlus 2
- Leaked render shows Android running on BlackBerry Passport hardware (Venice, too)
- Will Google release its Android M preview for some older Nexus hardware?
- Leaked iPhone 6s may look like an iPhone 6, but it will be thicker
Watch today's Pocketnow Daily as we talk about a possible surprise from T-Mobile coming next week that could have something to do with Apple Music. Then we talk about the OnePlus 2 and how it might gain a metallic chassis. BlackBerry is next as we get renders of a BlackBerry Passport and the Venice running Android. Google follows as Android M could reach legacy devices even if we thought it wouldn't. We end today's show talking about the iPhone 6s and its differences with the iPhone 6.
All this and more after the break.
Subscribe:
About us:
Pocketnow has been a key source of mobile technology news and reviews since its establishment in 2000. With offices on three continents, Pocketnow offers round-the-clock coverage of the mobile technology landscape, from smartphones to tablets to wearables. We aim to be your number-one source for mobile tech news, reviews, comparisons, and commentary. If you love mobile as much as we do, be sure to subscribe!
Follow us: 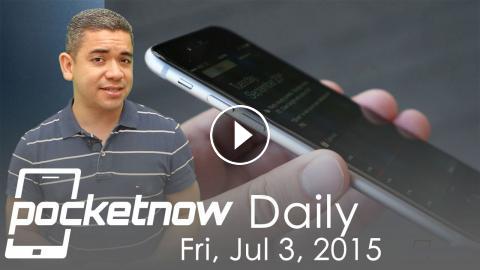