admin
Stories:
- Surface tabs at the center of NFL malfunction scandal again, Microsoft rejects blame
- Samsung plans on shooting VR movies at its New York facilities
- Samsung tacked with lawsuit over poor Android update record
- First Marshmallow updates for Samsung phones reportedly ‘delayed’ for February
- Sony owns up to absent Xperia Z5 fingerprint scanners for US release, offers non-explanation
- This may just be our first real look at the iPhone 5se (not 6c) next to the iPhone 5
Watch today's Pocketnow Daily as we talk about how the Microsoft Surface seems to be giving the NFL some trouble. Then we discuss Samsung's plans to expand VR to new markets. Samsung continues, this time as we hear of how bad it can be with its Marshmallow updates. Sony then tells us a little more about the lack of a fingerprint scanner on its Xperia Z5 in the US. We end today's show talking about the iPhone mini and its comparison with the iPhone 5.
All this and more after the break
Subscribe:
About us:
Pocketnow has been a key source of mobile technology news and reviews since its establishment in 2000. With offices on three continents, Pocketnow offers round-the-clock coverage of the mobile technology landscape, from smartphones to tablets to wearables. We aim to be your number-one source for mobile tech news, reviews, comparisons, and commentary. If you love mobile as much as we do, be sure to subscribe!
Follow us: 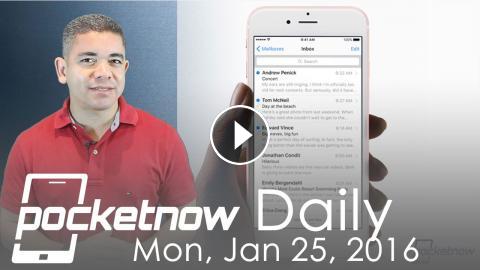