admin
Stories:
- OnePlus teases June 1 announcement to “shake up” the industry
- Microsoft announces Cortana app for Android and iOS
- iPhone 6s screen will utilize smaller backlight chips, iPhone 6s Plus too
- Android M will allegedly focus on resource usage, dev preview expected before launch
- Evidence for rumored new LG Nexus phone helps clear up codename leak
Watch today's Pocketnow Daily as we talk about the OnePlus teaser of new things to come in June. Microsoft is next as the company has just announced Cortana for iOS and Android. We then talk about the iPhone 6s and iPhone 6s Plus, as we get trusted rumors on a new display. We then talk about Android M and Google's new focus to improve the user experience. We end today's show talking about the new LG Nexus, in addition to the Huawei Nexus, and proof of their existence.
All this and more after the break.
Subscribe:
About us:
Pocketnow has been a key source of mobile technology news and reviews since its establishment in 2000. With offices on three continents, Pocketnow offers round-the-clock coverage of the mobile technology landscape, from smartphones to tablets to wearables. We aim to be your number-one source for mobile tech news, reviews, comparisons, and commentary. If you love mobile as much as we do, be sure to subscribe!
Follow us: 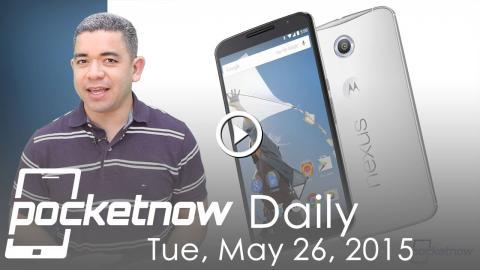