admin
T-shirts provided by RIPT. Learn more about it here:
Stories:
- Once again, 32GB Nexus 5X discounts steepen — this time below $250
- Galaxy Note7 confirmed* as device name, Samsung does indeed skip a number
- iPhone 7 metal casing has speakers, space oddity
- Huawei making Android smartphones as long as OS is open, CEO says
- First-party Google smartphone could come aside from Nexus devices this year
Watch today's Pocketnow Daily as we talk about some of the new deals that are being offered for the Google Nexus 5X. Then we talk about the probable final name for the Samsung Galaxy Note 7. The iPhone 7 follows as some metal casing leaks show us a new camera hole, in addition to more speakers. Huawei follows as the company's CEO has confirmed its commitment to Android. We end today's show talking about the probable first true Google phone to be manufactured for Android.
All this and more after the break.
Subscribe:
About us:
Pocketnow has been a key source of mobile technology news and reviews since its establishment in 2000. With offices on three continents, Pocketnow offers round-the-clock coverage of the mobile technology landscape, from smartphones to tablets to wearables. We aim to be your number-one source for mobile tech news, reviews, comparisons, and commentary. If you love mobile as much as we do, be sure to subscribe!
Follow us: 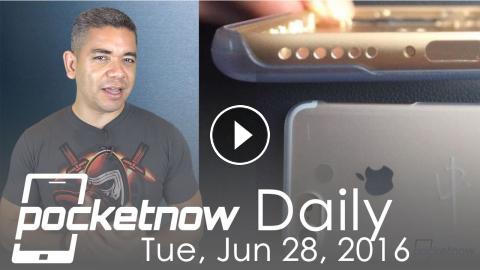