admin
Watch today's Pocketnow Daily as we talk about new leaks for the Google Pixel 3 XL that show the phone booted up and also tells us it has 3 front facing cameras. Then we talk about the new Galaxy Note 9 and the fact that the iPhone X beat it in some benchmarks that just appeared. The OPPO F9 with the teardrop display will launch August 15th with a beautiful screen and other nice features. TCL is reportedly working on a phone that will spark up nostalgia called the Palm Pepito even though it has pretty weird specs for 2018. We end today's show with deals for the Galaxy Note 9 on eBay.
All this and more after the break.
Stories:
- New Google Pixel 3 XL video leaked, this time in action
- Galaxy Note9 benchmark results poorer than iPhone X
- OPPO F9 coming August 15 with Waterdrop Screen, VOOC Flash Charge, Gradient Colors
- Palm “Pepito” leaked as a tiny comeback destined for Verizon
- 128GB unlocked Samsung Galaxy Note 8 on sale in eBay
#GalaxyNote9 #iPhoneX #Pixel3XL #GooglePixel #OPPOF9 #Palm #GalaxyNote8 #PalmOS #Android #iOS #Smartphones
Subscribe:
Graphics provided by: Motionvfx.com
About us:
Pocketnow has been a key source of mobile technology news and reviews since its establishment in 2000. With offices on three continents, Pocketnow offers round-the-clock coverage of the mobile technology landscape, from smartphones to tablets to wearables. We aim to be your number-one source for mobile tech news, reviews, comparisons, and commentary. If you love mobile as much as we do, be sure to subscribe!
Follow us: 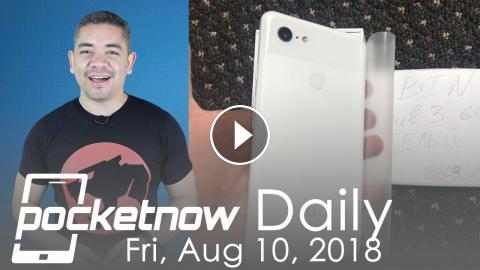 Watch today's Pocketnow Daily as we talk about new leaks for the Google Pixel 3 XL that show the phone booted up and also tells us it has 3 front faci...