admin
- OnePlus 6T Launch Event
On Pocketnow Daily, we get an invite for the OnePlus 6T this October 30th in New York City. The Google Pixel 3 and 3 XL are being sold in Hong Kong for over $2,000 and are fully working. Some users mainly in Australia are having trouble with their Apple Watches as they get stuck in a boot loop due to the Daylight saving time ending. Facebook just launched two smart displays to compete with the Amazon Echo Show, they work with Alexa and also feature video calls. We end today's show with the new HP Chromebook x360 14 being available for pre-orders.
All this and more after the break.
Stories:
- OnePlus 6T event officially locked in for October 30
- Hong Kong store sells Google Pixel 3 XL for more than US$2,000
- Apple Watch Series 4 experiencing daylight saving bug?
- Portal and Portal+ are Facebooks new smart speaker with Amazon Alexa
- Pre-orders for the new HP Chromebook x360 14 start today
#PocketnowDaily #OnePlus6T #Pixel3XL
Subscribe:
Follow us:
Graphics provided by: Motionvfx.com
About us:
Pocketnow has been a key source of mobile technology news and reviews since its establishment in 2000. With offices on three continents, Pocketnow offers round-the-clock coverage of the mobile technology landscape, from smartphones to tablets to wearables. We aim to be your number-one source for mobile tech news, reviews, comparisons, and commentary. If you love mobile as much as we do, be sure to subscribe!
[Video Title]
[Video URL]
Pocketnow 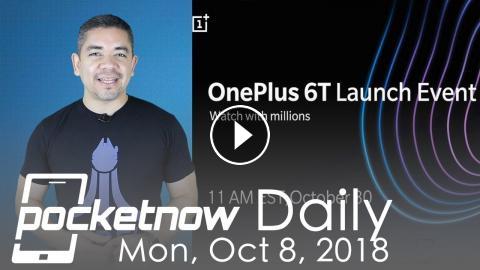 - OnePlus 6T Launch EventOn Pocketnow Daily, we get an invite for the OnePlus 6T this October 30th in New York City. The Google Pixel 3 and 3 XL are b...