ava
Join Persia as she talks about the Halo co-creator’s reaction to Halo Infinite so far, Resident Evil 4 VR launching on the Oculus Quest 2, and the reworks coming to Bastion and Sombra in the next Overwatch game.

In today’s episode of GameSpot News, Persia talks about the reaction of Halo’s co-creator to Halo Infinite after the recent beta. Marcus Lehto said he had a "great time" playing Infinite over the weekend, going on to praise its combat and map designs. The next Halo Infinite beta test begins September 30, and it will invite players to try Big Team Battle for the first time.

Persia also goes over the details for the launch of Resident Evil 4 VR. This version completely reimagines the classic title and provides a brand-new way to experience it which will be coming to the Oculus Quest 2 on October 21.

Lastly, she talks about the big changes to Sombra and Bastion in the next Overwatch game as details were revealed during the Overwatch League Grand Finals. Sombra receives a series of tweaks while Bastion has gotten much more of an overhaul.

For more information on all of our topics today, visit gamespot.com 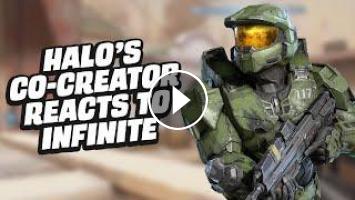 Join Persia as she talks about the Halo co-creator’s reaction to Halo Infinite so far, Resident Evil 4 VR launching on the Oculus Quest 2, and the rew...