ava
On today's Save State, Persia talks about our first look at Halo Infinite gameplay and highlights other Xbox Games Showcase announcements like a new Fable, Outer World DLC, and more.

This Save State focuses on all things from the Xbox Game Showcase. The livestream kicked off with our first look at Halo Infinite gameplay. A cinematic opening fit for Master Chief began with a crash landing and took us into a mission on a massive map. Halo Infinite is confirmed to be larger than previous titles and Microsoft already spoke on brand new mechanics being added to the series. Multiplayer will be revealed in the coming months but other features like sprinting and the rumored grappling hook were shown in the gameplay.

There were also a variety of first and third-party games announced, like a brand new Fable, State of Decay 3, and Outer Worlds DLC. Fable's announcement closed out the show but gameplay or a release date were not provided.

Other announcements gave us more information on games like Hellblade 2: Senua's Sacrifice and Everwild, with new trailers and deeper looks into their worlds. And we also got confirmation that Destiny 2 will be making its way to next-gen through Game Pass.

There was even more details revealed during the Xbox Games Showcase and you can check it all out on GameSpot.com. While you're there, stop by our store to purchase Play For All merch, the proceeds of which are donated to Black Lives Matter and COVID-19 Relief.

This is your Save State for Thursday, July 23rd. 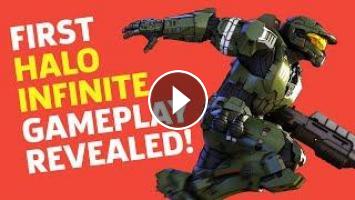 On today's Save State, Persia talks about our first look at Halo Infinite gameplay and highlights other Xbox Games Showcase announcements like a new F...