admin
Get the links to all of today's stories right here:
Today on In Case You Missed It: YouTuber Colin Furze teamed up with Ford to build a working hoverbike within just a few weeks, from his shed. It runs off of two diesel engines so granted, it’s probably not the most mass-production friendly item, but does beg the question: What’s holding everyone back, then?
Photographer Levon Biss worked with Oxford University to take incredibly detailed, microscopic photos of bugs, which were then blown up and printed into large posters. And Dyson has released its first personal care device and it is a re-imagined hair dryer, called the Supersonic, which is far less noisy and heavy compared to modern day dryers. They will cost $400.
Make sure you can talk with some authority about the military’s digital strike against ISIS, but also know all about why a teenaged girl is being sued (along with Snapchat) after crashing while going more than 100 miles per hour in her daddy’s Mercedes. As always, please share any great tech or science videos you find by using the #ICYMI hashtag on Twitter for @mskerryd.
Read More:
Get More Engadget:
•Subscribe to Engadget on YouTube:
•Like us on Facebook:
•Follow us on Twitter:
•Follow us on Instagram:
•Add us on Snapchat: gadgetsnaps
•Read more:
Technology isn't all about bits and processors. It's the car with no driver, human organs printed in a lab and leisurely flights into space. It's the future and Engadget is here to tell you all about it.
Since 2004, Engadget has covered cutting edge devices and the technology that powers them. We're looking beyond the gadgets themselves to explore how they impact our lives.
Engadget is the definitive guide to this connected life.
Also on Engadget's YouTube Channel:
•“In Case You Missed It” (aka #ICYMI) is a daily clip show designed to dig up the offbeat and interesting stories that get buried by the biggest headlines. We'll bring you space and tech news, as well as internet lifestyle funk, and we'll round out each week's show with a headline blast to bring you the big stories you might have missed.
• “Dear Veronica” is an advice show for the modern era. Every week, Veronica Belmont will tackle questions from the audience on topics ranging from technology to social etiquette (and everything in between). 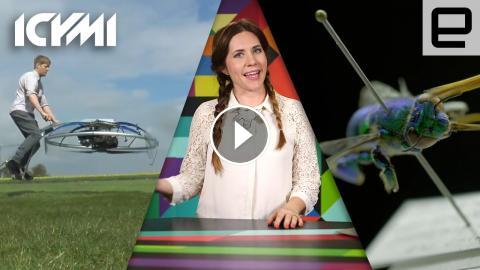 Get the links to all of today's stories right here:Today on In Case You Missed It: YouTuber Colin Furze teamed up with Ford to build a working hoverbi...