admin
Today on In Case You Missed It: AAA and the University of Utah teamed up to collect data on how well driver’s fare while using voice commands. The results are pretty terrible: Apparently it takes a full 27 seconds for a driver to fully concentrate after attempting to call someone while behind the wheel. Meanwhile Florida may be good for something beyond just the best Twitter account this side of the Atlantic. Researchers there found a strain of deep-sea bacteria that might be able to help fight global warming by attacking greenhouse gases. And a Spaniard got the first implanted 3D printed ribs in the world after a cancer fight. Good on him!
Anyone that knows about the Bay Area’s rampant terrible bridge construction problem might be interested in this important bit of steel news. And we’re looping in our love of puzzle boxes with the granddaddy woodworking projects from Craig Thibodeau: An automation table with secret compartments.
If you come across any interesting videos, we’d love to see them. Just tweet us with the #ICYMI hashtag @engadget or @mskerryd.
Read More:
Get More Engadget:
•Subscribe to Engadget on YouTube:
•Like us on Facebook:
•Follow us on Twitter:
•Follow us on Instagram:
•Add us on Snapchat: gadgetsnaps
•Read more:
Technology isn't all about bits and processors. It's the car with no driver, human organs printed in a lab and leisurely flights into space. It's the future and Engadget is here to tell you all about it.
Since 2004, Engadget has covered cutting edge devices and the technology that powers them. We're looking beyond the gadgets themselves to explore how they impact our lives.
Engadget is the definitive guide to this connected life.
Also on Engadget's YouTube Channel:
•“In Case You Missed It” (aka #ICYMI) is a daily clip show designed to dig up the offbeat and interesting stories that get buried by the biggest headlines. We'll bring you space and tech news, as well as internet lifestyle funk, and we'll round out each week's show with a headline blast to bring you the big stories you might have missed.
• “Dear Veronica” is an advice show for the modern era. Every week, Veronica Belmont will tackle questions from the audience on topics ranging from technology to social etiquette (and everything in between). 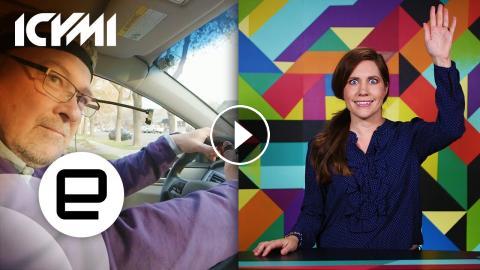 Today on In Case You Missed It: AAA and the University of Utah teamed up to collect data on how well driver’s fare while using voice commands. The res...