admin
Get more ICYMI:
Today on In Case You Missed It: Curling up with a fireplace and a bottle of whiskey is now a little less depressing, now that we know self-heating concrete is on the way. Still a research project in Nebraska, conductive concrete can operate on a low amount of electric current and de-ice itself. It’s just what we’ve needed.
A new wheelchair still waiting on FDA approval would take the access problem down a notch. The TopChair S can climb stairs for $16,000.
And Harvard engineers unleashed their gentle yet strong robot hands underwater, delicately collecting samples of marine specimans.
There are a lot of great stories to chose from in TLDR, but the one you’ll want to be most up on is the evidence of a 9th planet in our solar system. Please share any interesting science or tech videos, anytime! Just tweet us with the #ICYMI hashtag to @mskerryd.
Read More:
Get More Engadget:
•Subscribe to Engadget on YouTube:
•Like us on Facebook:
•Follow us on Twitter:
•Follow us on Instagram:
•Add us on Snapchat: gadgetsnaps
•Read more:
Technology isn't all about bits and processors. It's the car with no driver, human organs printed in a lab and leisurely flights into space. It's the future and Engadget is here to tell you all about it.
Since 2004, Engadget has covered cutting edge devices and the technology that powers them. We're looking beyond the gadgets themselves to explore how they impact our lives.
Engadget is the definitive guide to this connected life.
Also on Engadget's YouTube Channel:
•“In Case You Missed It” (aka #ICYMI) is a daily clip show designed to dig up the offbeat and interesting stories that get buried by the biggest headlines. We'll bring you space and tech news, as well as internet lifestyle funk, and we'll round out each week's show with a headline blast to bring you the big stories you might have missed.
• “Dear Veronica” is an advice show for the modern era. Every week, Veronica Belmont will tackle questions from the audience on topics ranging from technology to social etiquette (and everything in between). 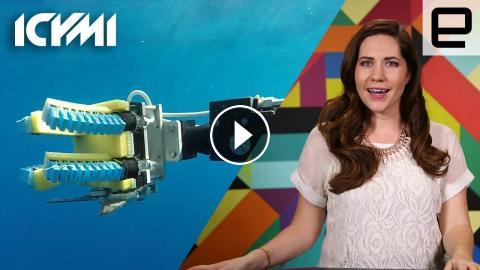 Get more ICYMI: Today on In Case You Missed It: Curling up with a fireplace and a bottle of whiskey is now a little less depressing, now that we know ...