admin
Stories:
- Huawei and Leica partner to “reinvent” the smartphone camera
- Microsoft throws in the towel on Project Astoria Windows 10 Android support
- Did HTC not get the memo on modern storage requirements? One M10 16GB model rumored
- HTC exec promises “very, very compelling camera experience” from One M10
- iPhone 5se won’t make up for declining Apple parts orders
- Apple’s next tablet may be a smaller iPad Pro, rather than the iPad Air 3
Watch today's Pocketnow Daily as we talk about the news regarding Huawei and Leica working together to reinvent the smartphone camera. Then Microsoft follows as we hear of how Project Astoria for Windows 10 and Android is now a thing from the past. HTC is next as the company is rumored to bring limited storage to the One M10, even though it just teased a great camera. Apple then takes the stage with analysts predicting what to expect from the iPhone 5se. We end today's show talking about the iPad Air future, as the name might not follow the current trend.
All this and more after the break.
Subscribe:
About us:
Pocketnow has been a key source of mobile technology news and reviews since its establishment in 2000. With offices on three continents, Pocketnow offers round-the-clock coverage of the mobile technology landscape, from smartphones to tablets to wearables. We aim to be your number-one source for mobile tech news, reviews, comparisons, and commentary. If you love mobile as much as we do, be sure to subscribe!
Follow us: 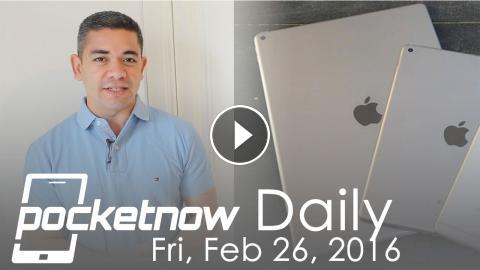