Added 1 year ago by admin
99 Views
- Swappa: Shop gently used wearables on a budget.
On Pocketnow Daily, OnePlus and McLaren are teaming up for a special edition of the OnePlus 6T. Some new CAD renders of the Xperia XZ4 reveal Sony's first triple camera smartphone. New patents hint to Microsoft refreshing the Surface's design along with its keyboard. Project Fi is now Google Fi and is adopting lots of new phones with specific deals for them right now. We end today's show with Apple boosting their trade-in deals by about $100.
All this and more after the break.
Stories:
- OnePlus 6T McLaren Edition coming December 11
- Sony triple-camera Xperia XZ4 leaks
- Microsoft Surface patent hints at possible redesign and thinner keyboard
- Project Fi is dead, long live Google Fi with support for iPhones and more Android devices
- Apple boosting some iPhone trade-ins by $100 toward iPhone XR and XS
#PocketnowDaily #OnePlus6T #XperiaXZ4
Subscribe:
Follow us:
Graphics provided by: Motionvfx.com
About us:
Pocketnow has been a key source of mobile technology news and reviews since its establishment in 2000. With offices on three continents, Pocketnow offers round-the-clock coverage of the mobile technology landscape, from smartphones to tablets to wearables. We aim to be your number-one source for mobile tech news, reviews, comparisons, and commentary. If you love mobile as much as we do, be sure to subscribe!
[Video Title]
[Video URL]
Pocketnow 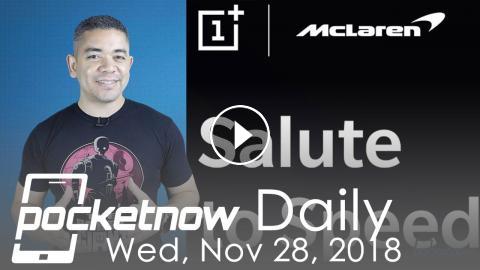 - Swappa: Shop gently used wearables on a budget.On Pocketnow Daily, OnePlus and McLaren are teaming up for a special edition of the OnePlus 6T. Some ...