ava
Even though the OnePlus 8T is a mid-cycle model for the company, it impresses. It is very much a downsized OnePlus 8 Pro, inheriting the same screen refresh rate and almost-identical battery size, but puts it in a smaller, easier-to-hold package. There’s even 65W fast charging, which has been one of my favorite smartphone technological breakthroughs this year. All of these, combined with the slick OxygenOS 11, make for a great smartphone experience.

It’s not perfect though. The OnePlus 8T is let down by the general camera experience and hardware design. It felt like OnePlus was holding back on better cameras, especially when the 8 Pro or the 8 had similar camera issues. Maybe that’s the problem with a mid-cycle model: OnePlus probably wanted to save something special for the next major release. Or maybe it was a production cost issue, but then again, the OnePlus 8T is now fighting hand to hand with Samsung’s even cheaper Galaxy S20 FE, which might take better photos.

The OnePlus 8T is a great choice among the latest crop of flagship phones. It focuses on practicality, speed and, to an extent, value. For some, this will be all they need -- at least until the OnePlus 9 comes along. 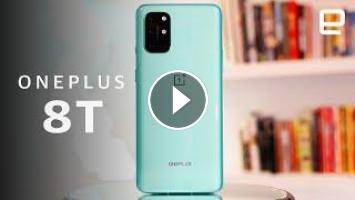 Even though the OnePlus 8T is a mid-cycle model for the company, it impresses. It is very much a downsized OnePlus 8 Pro, inheriting the same screen r...