Edy
On Pocketnow Daily, some Geekbench benchmarks make the Galaxy Note 10 Plus seem slow. We have new details on the heavily rumored 16in MacBook Pro. Apple just released iOS 13 Beta 4 to the public along with their other OS updates. The Xiaomi Black Shark 2 is now available with some impressive specs for very cheap. MediaTek just announced the Helio G90 and G90T gaming processors. We end today's show with deals for the Apple Watch Series 3 on Amazon and Target.

Stories:
- All the major US carriers may offer BOGO deals on Galaxy Note 10
https://www.sammobile.com/news/all-major-us-carriers-bogo-deals-galaxy-note-10/
- The leaked Geekbench score for the Galaxy Note 10+ is the same as the almost 2 year iPhone X, 8 and 8 Plus. iPhones are well optimized.
https://www.reddit.com/r/iphone/comments/cjgt4s/the_leaked_geekbench_score_for_the_galaxy_note_10/
- DigiTimes: 16-Inch MacBook Pro Will Feature Narrow Bezels and Launch in September
https://www.macrumors.com/2019/07/29/16-inch-macbook-pro-narrow-bezels/
- Apple releasing fourth iOS 13 public beta, fifth watchOS 6 developer beta
https://9to5mac.com/2019/07/30/apple-releasing-fourth-public-beta-of-ios-13-to-users-today/
- Black Shark 2 Pro revealed: Snapdragon 855 Plus, UFS 3.0, 12GB RAM for under $450
https://www.androidauthority.com/xiaomi-black-shark-2-pro-1011000/
- MediaTek Helio G90, G90T revealed: What to expect from its first gaming SoC?
https://www.androidauthority.com/mediatek-helio-g90-1009807/
- Apple Watch Series 3 is on sale from $190 (Up to $90 off)
https://9to5toys.com/2019/07/29/apple-watch-series-3-target-offer/ 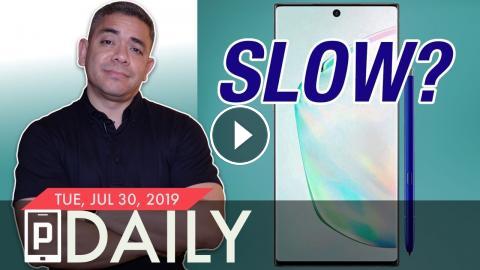 On Pocketnow Daily, some Geekbench benchmarks make the Galaxy Note 10 Plus seem slow. We have new details on the heavily rumored 16in MacBook Pro. App...