admin
Watch today's Pocketnow Daily as we talk about the rumors that Samsung is investing heavily in bringing better facial recognition to the Galaxy S10. Then we talk about the iPhone SE2 possible leaks, along with Apple's event invite for March 27th. Then we talk about the possible HTC U12+ and what to expect when it comes to specs. ZTE is next as we hear that the Blade V9 might bring some Pixel camera software. We end today's show talking about deals for the Google Pixel 2.
All this and more after the break.
Stories:
- Baby Google Pixel 2 with 128GB storage costs $580 on eBay in ‘new other’ condition
- ZTE Blade V9 features third-party computational photo technology from FotoNation
- iPhone SE 2 or Chinese Android iPhone X copy? Video shows it off
- Low-cost new iPad and MacBook top suspect list for Apple’s March 27 education event
- HTC Imagine (U12+) has four cameras, less bezels
- Samsung is reportedly hard at work on 3D sensing tech for Galaxy S10 Face ID rival
Read more:
Lee más en Español:
Subscribe:
About us:
Pocketnow has been a key source of mobile technology news and reviews since its establishment in 2000. With offices on three continents, Pocketnow offers round-the-clock coverage of the mobile technology landscape, from smartphones to tablets to wearables. We aim to be your number-one source for mobile tech news, reviews, comparisons, and commentary. If you love mobile as much as we do, be sure to subscribe!
Follow us: 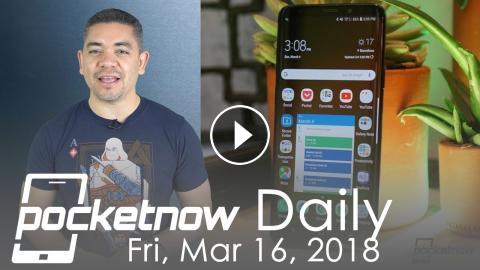 Watch today's Pocketnow Daily as we talk about the rumors that Samsung is investing heavily in bringing better facial recognition to the Galaxy S10. T...