DNA is similar to a hard drive or storage device, in that contains the memory of each cell of every living, and has the instructions on how to make that cell. DNA is four molecules combined in any order to make a chain of one larger molecule. And if you can read that chain of four molecules, then you have a sequence of characters, like a digital code. Over the years the price of sequencing a human genome has dropped significantly, much to the delight of scientists. And since DNA is a sequence of four letters, and if we can manipulate DNA, we could insert a message and use DNA as the storage device.

At this point in time, we are at the height of the information age. And computers have had an enormous impact on all of our lives. Any information is able to be represented as a collection of bits. And with Moore's law, which states that computing power doubles every 18 months, our ability to manipulate and store these bits has continued to grow and grow. Moore's law has been driven by scientists being able to make transistors and integrated circuits continuously smaller and smaller, but there eventually comes a point we reach in which these transistors and integrated circuits cannot be made any smaller than they already are, since some are already at the size of a single atom. This inevitably leads us into the quantum world. Quantum mechanics has rules which are, in many ways, hard for us to truly comprehend, yet are nevertheless tested. Quantum computing looks to make use of these strange rules of quantum physics, and process information in a totally different way. Quantum computing looks to replace the classical bits which are either a 0 or a 1, with quantum bits, or qubits, which can be both a 0 and a 1 at the same time. This ability to be two different things at the same time is referred to as a superposition. 200 qubits hold more bits of information than there are particles in the universe. A useful quantum computer will require thousands or even millions of physical qubits. Anything such as an atom can serve as a quantum bit for making a quantum computer, then you can use a superconducting circuit to build two artificial atoms. So at this point in time we have a few working quantum transistors, but scientists are working on developing the quantum integrated circuit. Quantum error correction is the biggest problem encountered in development of the quantum computer. Quantum computer science is a field that right now is in its very early stages, since scientists have yet been able to develop any quantum hardware.

A quantum computer would be perfect for tackling quantum problems like simulating the properties of a new molecule or material or help us to create a catalyst that will remove CO2 from the atmosphere, or make pattern recognition in computers much more efficient, and also in code breaking, and privacy and security of personal information since quantum information can never be copied.

A great deal of the energy we create has to go into maintaining computations and data storage but we can reduce our energy expenditure significantly by looking to nature. Nature is much more effective at information processing. For example, in the process of photo synthesis, there is a nanowire, who's quantum efficiency is almost 100%. DNA is also a great example of energy efficiency represented in nature, since DNA base pairing can be considered a computational process. Computers generate heat by performing computations because each computation is irreversible. Quantum mechanics can make those computations reversible, since a quantum computer can perform two functions at the same time. 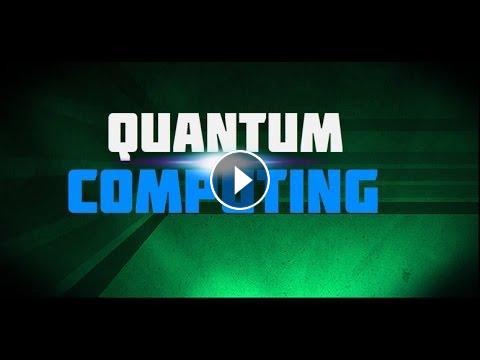 Science Documentary: DNA Hard Drives, Quantum Computing, Moore's Law DNA is similar to a hard drive or storage device, in that contains the memory of ...