admin
To celebrate International Women's Day, Talks at Google and Made with Code will be joined by Oprah Winfrey, Storm Reid, Gugu Mbatha-Raw and director Ava DuVernay to discuss their new film Disney's "A Wrinkle in Time." Moderated by Google's Eileen Naughton, VP, People Operations.
Ask your questions on social using #WrinkleInTimeAtGoogle
About Made with Code
Google started Made with Code because increasingly more aspects in our lives are powered by technology, yet women aren’t represented in the roles that make technology happen. If we can inspire teen girls to see that code can help them pursue their passions, whatever they may be, then hopefully they will begin to contribute their voices to the field of technology for the benefit of us all. Read more about Made with Code at
About Disney's "A Wrinkle in Time" (in theaters March 9)
From visionary director Ava DuVernay comes Disney’s “A Wrinkle in Time,” an epic adventure based on Madeleine L’Engle’s timeless classic which takes audiences across dimensions of time and space, examining the nature of darkness versus light and, ultimately, the triumph of love. Through one girl’s transformative journey led by three celestial guides, we discover that strength comes from embracing one’s individuality and that the best way to triumph over fear is to travel by one’s own light. 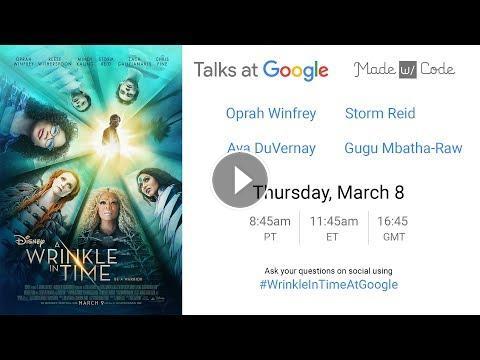 To celebrate International Women's Day, Talks at Google and Made with Code will be joined by Oprah Winfrey, Storm Reid, Gugu Mbatha-Raw and director A...