ava
We got our hands on Call of Duty Black Ops Cold War's multiplayer! One of the new modes included in our preview was "VIP Escort". In this game mode, you either play as a team escorting a VIP, or the opposing team whose mission is to eliminate the VIP. The VIP is a randomly selected playable character, and is controlled either by you or someone on your team.

When you play as the VIP, your only weapon is a handgun, so relying on your team mates to get you to the exfil point is key. In our first match on the "Miami" map, we take control of the VIP and are escorted safely by our team. Our second and third matches take place in a large snow map called "Crossroads". Despite an attack of the middle of the map, our team eliminates the VIP just as he's preparing to leave. In our third match, our mission is to again eliminate the enemy VIP. In an awesome last-minute play, the VIP is sniped just before he's able to escape!

Got questions about Cold War's multiplayer experience? Be on the lookout for our upcoming video where our very own Michael Higham answers questions based on his experience with his playtime. Everything from guns used, map design, perks and more. 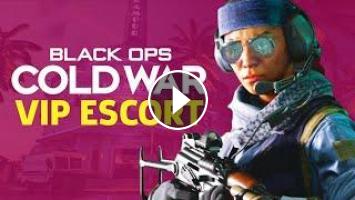 We got our hands on Call of Duty Black Ops Cold War's multiplayer! One of the new modes included in our preview was "VIP Escort". In this ga...