WHAT IF THERE WAS NO MOON? AT ALL!

Can you imagine our sky without the Moon? Of course, we don’t mean the Moon hiding behind heavy clouds but absolutely no Moon at all. We at Smart is the new Sexy decided to find out what will happen to our planet if we stay without our beloved satellite. Are you ready?

How did the Moon get there?
Let’s first talk about the history of our satellite. Our Moon is about  4.51 billion years, approximately 60 million years younger than the Solar System. It formed from the debris that appeared as a result of a massive collision between a large asteroid that was about the size of Mars and the early Earth.
Originally the Moon used to spin on its own axis much more quickly than it does today, as did the Earth. However, over time the Moon’s spin slowed down. This is because the gravitational pull of the Earth on the Moon distorted its shape, making it bulge in the center and it slowed it down until the speed at which it spun on its axis matched the rate at which it orbited the Earth. This is why we only see one face of the Moon.
Of course, the gravitational forces between the Earth and the Moon are not one sided, the Moon also has a gravitational pull on the Earth and this causes some obvious effects here on Earth, like the tides in our oceans and seas.
So what would happen if it suddenly disappeared?

WHAT IF THERE WAS NO MOON? AT ALL! 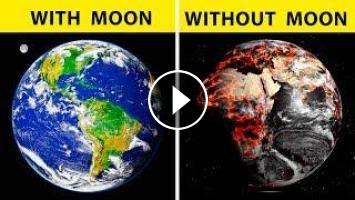 Subscribe! Because SMART IS THE NEW SEXY: https://goo.gl/JTfP6L Can you imagine our sky without the Moon? Of course, we don’t mean the Moon hiding beh...