2020 Audi RS6 Avant First Look Review: The Fast Wagon Has Returned
For the past several decades, it has sucked to be a wagon fan in the United States. The original RS2 Avant was never offered in America, nor were any generations of the RS4 or RS6. We occasionally received Sportback models like the RS5 and RS7 but a high-performance wagon from Audi has strictly been forbidden fruit in the US. But earlier this year, we reported that Audi was toying with the idea to bring its fastest wagon model, the RS6 Avant, to the US market.

After several months of speculation, the rumors turned out to be true and the fourth generation RS6 Avant will be offered in the US for the first time ever. Even though Americans greatly favor SUVs, wagon sales have been on the rise lately and now might be the perfect time for Audi to make the wagon cool again.
When we last reviewed the Audi A6 sedan, we noted that the styling was too vanilla and we'd prefer to wait for the sportier S6 and possible RS6 versions. After the S6 was revealed looking mostly the same as the A6, we thought Audi simply couldn't build a head-turning luxury car anymore. Boy, were we wrong. This new RS6 is remarkably aggressive with massive wheel arches, sleek body lines, and silver accents on the massive front and rear diffusers. It almost looks like a DTM car and in an exciting color, will draw stares when you see it on the road.

Audi has widened the car by 1.6 inches and fitted it with RS-specific bodywork. Unlike its luxury competitors, the BMW M5 and Mercedes-AMG E63, the RS6 looks remarkably different from the car on which it is based.
Inside, the RS6 retains the interior we loved in the A6 but dials up the aggression. A new flat-bottom steering wheel looks sportier than the round one found in the A6 and the RS seats look capable of keeping the driver in place while also offering comfort on long journeys. Audi's Virtual Cockpit is one of the best digital gauge clusters on the market and the company's Touch MMI interface is highly intuitive 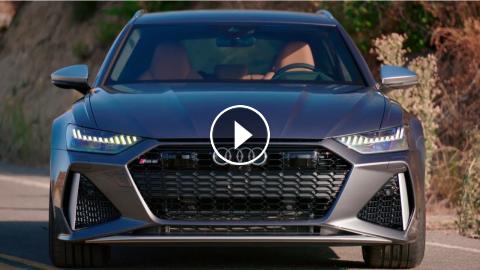