The redesigned Q7 is set to go on sale in the U.S. during 2020 with seating for up to seven passengers. Front-seat riders will be treated to a feast of technology on some versions, including a digital instrument cluster and an additional pair of screens on the instrument panel that handle audio, climate, navigation, and other car functions. The 2020 Q8 largely discards hard buttons in favor of touchscreens, though some redundant switches are located on the spokes of the steering wheel.

Optional equipment includes a Bang & Olufsen audio system, a fragrance ionizer, and massaging front seats. The available adaptive cruise control system can adjust the speed automatically based on both traffic conditions and the posted limit.
Outside, the new Q7 has a gaping, chrome-ringed grille with six horizontal slats that looks to have been plucked from the Q8. The license plate sits low on the bumper and is flanked by large air intakes. The crossover SUV’s side profile is more upright than in the Q7, and it measures about 68 inches tall. Stretching 199.2 inches from bumper to bumper, the new Q7 is just less than half an inch longer than its predecessor. The Q7 is about 4 inches shorter than the BMW X7 and around 6 inches shorter than the Mercedes-Benz GLS-Class.

Audi promises more luggage space, though it hasn’t specified how much cargo space the seven-seat version of the Q7 bound for American showrooms will offer. In Europe, the Q7 comes standard with five seats and offers up to 72.4 cubic feet of cargo space in that configuration, though that figure will likely change for the seven-seat model.

Underhood, the Q7 will carry a version of the 3.0-liter supercharged V-6 from last year’s model, likely tied to an 8-speed automatic transmission. All-wheel drive likely will be standard at launch. It’s not clear if the 2.0-liter turbo-4 offered in certain configurations of the outgoing Q7 will show up again in the U.S., however.
A plug-in hybrid has been announced for Europe, but Audi hasn’t said if it will come to the U.S. 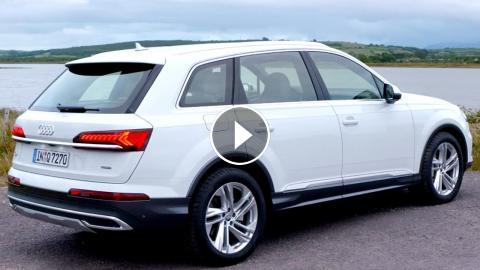