Ford has released the first images of the resuscitated King Ranch edition of its hot-selling Expedition full-size SUV that we told you about a month ago for the 2020 model. There’s also word that the Platinum trim has been upgraded with new leather materials and high-end finishes.

As we previously told you, the interior on the King Ranch edition gets Del Rio leather on all three rows of seats, door and console trim and steering wheel wrap. The “Running W” logo is also emblazoned into the seatbacks on all three rows, and on the aluminum tread plates and floor mats.

Through August, Ford says year-to-date U.S. sales of the Expedition were up 56 percent compared to the same period in 2018, making it the best eight-month start for the Expedition in more than a decade. Ford says roughly one in five customers who buy an Expedition choose the top-level Platinum trim.

Starting price on the 2020 Expedition King Ranch is $74,290, including destination, and $75,330 on the Platinum model, both prices including $1,395 destination fee. Both are available now and are expected to arrive in showrooms by October.

Ford builds the Expedition at its Kentucky Truck Plant in Louisville. 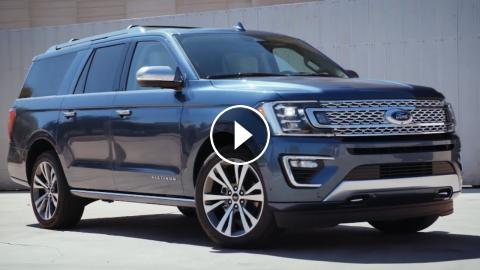 2020 Ford Expedition Platinum SUV Introduce https://youtu.be/gjaV0_VsCfAFord has released the first images of the resuscitated King Ranch edition of i...