Nissan’s pricing structure for its 2020 Pathfinder lineup is revealed, and the numbers are very close to 2019 figures. The base-model Pathfinder S starts at $31,680, an increase of $150 from the previous year. On the other end of the spectrum, an all-wheel-drive Platinum bumps up just $50 with a starting price of $44,610. Price increases for the other models – specifically the SV and SL range – vary between $50 and $100.
The Rock Creek Edition endures as a $995 add-on for SV and SL models. Compared to 2019, SV Rock Creek Edition Pathfinders are up by $100, with higher-spec SL Rock Creek variants seeing a $70 increase. All 2020 Pathfinders are subject to an additional $1,045 destination and handling charge.
As with 2019, the 2020 Rock Creek Edition punches up the three-row SUV with a tougher look on the outside and a bit more pizzaz on the inside. Fender flares, 18-inch wheels, and black trim are the updates to the exterior, while the inside gets contrast stitching and badging. A standard-issue trailer tow package lets the Rock Creek Edition tow up to 6,000 pounds. Other features and options throughout the Pathfinder lineup carry over to 2020 as well, including the venerable 3.5-liter V6 developing 284 horsepower, mated to a CVT driving either the front wheels or all four.

The current-generation Pathfinder received a facelift for the 2017 model year, but it actually dates back to 2013. That’s not necessarily ancient, but with the SUV realm evolving at a pace approaching light speed, the Pathfinder is definitely among the elders. Its old-school interior filled with buttons is rather dated, and while it has a certain amount of charm, our first-drive in the Rock Creek Edition found a vehicle not worthy of its price tag. And that was before the minor increase for 2020. 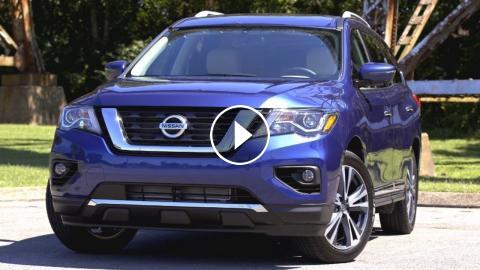