The Ford Explorer gets a complete overhaul for the 2020 model year, with big improvements in terms of tech, safety and styling. This all-new Explorer looks to not only maintain the crossover's popularity, but expand its appeal even further.

That's important, since the three-row crossover segment is one of the most competitive in the automotive space. When the new Explorer goes on sale this summer, it'll face fierce competition from the likes of the Chevrolet Traverse, Honda Pilot, Kia Sorento and Toyota Highlander, among others.

Let's take a look at how the 2020 Explorer is positioned against these well-known rivals.
At launch, the 2020 Explorer will come standard with a 2.3-liter, turbocharged EcoBoost four-cylinder engine and a 10-speed automatic transmission. It's not the most powerful standard engine in the segment -- the Traverse's V6 beats it by a mere 10 horsepower -- but the Explorer offers substantial power compared to its rivals. The standard four-cylinder engines in the Highlander and Sorento look downright anemic by comparison.

For those wanting more oomph, the Explorer's optional 3.0-liter, twin-turbocharged V6 leads the class in horsepower and torque. The V6 boasts a 5,600-pound tow rating, which is slightly better than most other entrants in this segment. Only the Dodge Durango and Nissan Pathfinder do better with towing, the former able to tow as much as 8,700 pounds thanks to its optional V8 engine. 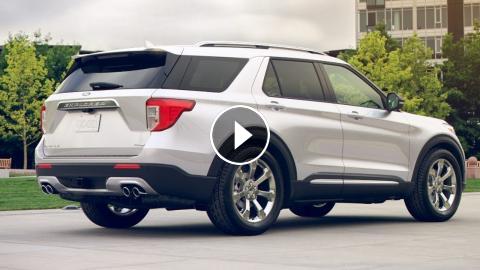 2020 Ford Explorer Suv Experience https://goo.gl/LWvWZnThe Ford Explorer gets a complete overhaul for the 2020 model year, with big improvements in te...