2020 Ford Escape Titanium: All-New Ford Escape Suv Experience https://youtu.be/OTvonKg38m4
The new 2020 Ford Escape takes a huge step forward in the competitive compact crossover market with a new platform, styling and powertrains. It's now being built on Ford's new modular architecture, and is the first vehicle riding on it to come to the United States. Ford promises better efficiency, space, comfort and handling with the new Escape. All of it gets wrapped in new sheetmetal that's wholly different from the Escape it's replacing.

We haven't driven any of the new Escapes yet (there are four variants), but will update this page with full driving impressions when we do. Ford has provided all the juicy details about what to expect, so keep reading to get completely up to speed on the 2020 Escape.
What's new for 2020?
The Escape went through a clean-sheet redesign for 2020. Its purpose as a compact crossover has not changed, but Ford decided to shake things up from a styling and powertrain perspective. All the dimensions are more favorable for utility and driving dynamics — it's longer, lower and wider — but Ford still wanted to keep the light off-roading ruggedness intact.

An Escape Hybrid is once again available, but this time, it's joined by a plug-in hybrid as well. Ford is targeting about 30 miles of pure electric range with the plug-in. The other two turbocharged gas-only engine options carryover with updates for 2020.
Ford revamped the Escape's interior for this 2020 redesign, and it strongly resembles the all-new 2019 Ford Focus sold in other global markets (it's based on the same platform as the Escape). Features from the 2020 Explorer can also be found throughout the cabin like the 12.3-inch digital instrument cluster, twist-dial gear selector and the same drive-mode controller. Ford is using a re-skinned version of Sync 3 for the car's infotainment system.
How big is the new Escape?
The 2020 Escape is getting bigger, measuring 180.5 inches in total length. This slots it right in the middle of its competition in terms of all-out size, but the Escape has a few tricks to maximize interior space.

Its sliding second row of seats brings legroom up to a staggering 40.7 inches when moved all the way back. This lets the Escape claim best-in-class second-row legroom for the non-hybrid models, with only the Honda CR-V in spitting distance. Cargo capacity is a solid 37.5 cubic feet for the non-hybrid Escapes (34.4 cu-ft on hybrid models). With the second row folded down, Ford says maximum capacity increases to 65.4 cu-ft. None of the cargo figures are class bests, but it places the Escape among the leaders in this fight. Ford loses out a bit here due to the more rounded rear end styling versus the boxy CR-V and Forester.
Ford offers the 2020 Escape with four powertrain choices. The base engine is a 1.5-liter turbocharged three-cylinder that makes 180 horsepower and 177 pound-feet of torque. Yes, only three cylinders, and for the first time in a Ford engine, there's cylinder deactivation, so it can actually operate as a two-cylinder. You can also upgrade to a 2.0-liter turbo four-cylinder that increases max output to 250 horsepower and 275 pound-feet of torque on 93 octane fuel, providing for a 0-60 mph time of 7.4 seconds.

Then there are the two hybrid powertrains that both use a 2.5-liter four-cylinder running on the more efficient Atkinson cycle to supplement the electric power. The normal 2020 Ford Escape Hybrid produces 198 horsepower and 153 pound-feet of torque, while the Escape Plug-In raises that to 209 horsepower and the same amount of torque. Ford claims the Escape Plug-In will go about 30 miles on a full charge, but EPA-estimated range is not available yet. Neither are any fuel economy figures for the new Escape available at this time. 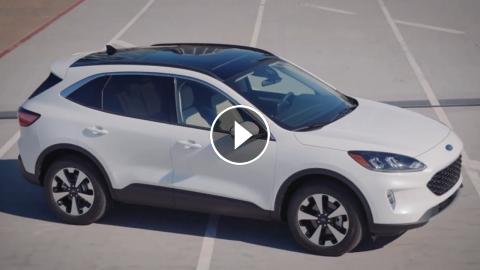