Mercedes's first big wager on electric vehicles, the EQC400, is a challenge to BMW's avant-garde approach. BMW bet big with its early gamble on electric cars in 2013. The Bavarians doubled down on expensive battery-electric technology with a pricey carbon-fiber body bolted atop an aluminum skateboard platform made exclusively for the i3. Then they gambled that EV buyers wanted a car that looked like nothing else. Charmingly nerdy and wholly original, the BMW i3 is a Smart Fortwo for Ivy League postdocs­—and it has the meager sales to prove it.

Benz's EQC is the antithesis of the i3, sharing 90 percent of its body structure with the gas-powered GLC-class to simplify manufacturing and keep costs in check. As a compact crossover, the EQC lands in the heart of the low-risk, high-reward slice of the market. And it will be instantly familiar to anyone who owns a contemporary Mercedes, because the EQC is defined by the three-pointed star on the faux grille just as much as it is by the charging port on the right-rear fender.
This electric Mercedes is serene enough to challenge the S-class's reputation as the king of quiet. Both front and rear motors are insulated from the body via two layers of rubber isolation, with the aft unit boxed in foam. Mercedes even stuffs acoustic insulation into the body vents that equalize pressure between the cabin and atmosphere to muffle road noise. (The company does this on some, but not all, gas vehicles as well.) Riding on steel coil springs up front and air springs in the rear, the EQC is athletic enough for beer-league kickball, but not so focused that it'll be stretching between innings. Metaphorically, that is. Literally, it drives like so many modern Mercs. There's precision in the steering, confidence in the body control, and just enough squish to keep it comfortable over cracks and heaves.

Quick, But Not Tesla Quick
The more efficient front motor does the bulk of the work while the rear motor stands ready for dynamic and slippery situations. Calling for full zap musters 402 horsepower and 561 lb-ft of torque to combat the EQC's 5500-pound heft. Like most electric vehicles, this one is quick on the draw, and we estimate a 5.0-second run to 60 mph. When distance matters more than drama, the Eco and Max Range driving modes place a false stop early in the accelerator pedal travel to limit power and speed. (You can push through this detent to summon full power if needed.) Steering-wheel paddles toggle between five different regeneration modes, the most aggressive of which provides 75 percent of the maximum possible regeneration when you lift off the accelerator.
Miraculously, the EQC's shape manages to be more generic than that of the GLC it's based on, as if the designers fretted over the details to the point that they polished them worry-stone smooth. The interior is better executed, with luxury, style, and the just-right sizing to be practical for four adults and cargo. High-gloss plastics, neatly tailored textiles, and a broad plank of digital screens on the dash give it a high-tech modern feel, while trim pieces that appear to be inspired by heat sinks give off a subtle steampunk vibe that we dig. 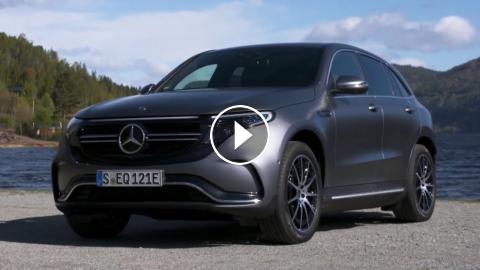