Back in 2017, we heard a rumor Mercedes would built a Maybach version of its biggest, luxurious SUV, the GLS, to compete against cars like the Bentley Bentayga, Rolls-Royce Cullinan, and Range Rover SVAutobiography. Now, that car has finally arrived. Meet the 2020 Mercedes-Maybach GLS 600.

Obviously, the GLS 600 is more than just a normal GLS with a different fascia and a two-tone paint job. The biggest change comes inside, where the second and third row of seats have been deleted for a more appropriate individualized three-seater setup with adjustable heated, ventilated, and massaging outer seats plus a bunch of extra legroom. Shown here is the split two-seat setup with a fixed center console, available "on special request." It gets extendable folding tables, and even a refrigerator for champagne bottles (Maybach branded champagne flutes are, of course, available as an option).
Standard equipment in the rear includes a panoramic sunroof, seven-inch tablets, a separate air conditioning system with extra vents, wireless charging station, heated and cooled cup holders, and a wooden parcel shelf that separates the rear seating area from the luggage section. Add that stuff to the range of normal GLS features, like nine USB ports, a 115-volt household-type power outlet, Apple CarPlay, Android Auto, a 64-color ambient lighting system, and a Burnmester sound system, and you've got yourself one hell of a luxury SUV.

Other cool features include a dedicated "Maybach" drive mode that's designed to deliver the most comfortable ride possible for the rear passengers on a journey. When the rear doors open, the car lowers itself and extends an illuminated running board for easy ingress and egress.

The engine is a version of the 4.0-liter twin-turbo V-8 found in much of Mercedes's lineup, making 550 horsepower and 538 lb-ft of torque in this application. Unlike the Maybach S-Class, there's no V-12 available here. The engine is paired to a 48-volt electrical system that, when sufficiently charged, can deliver an extra 21 horsepower and 184 lb-ft of torque to the wheels. The powertrain is good enough for a 0-60 time of 4.8 seconds, and an electronically limited top speed of 130 mph.

Mercedes hasn't released a price for the GLS 600, but considering all the extra stuff you get, expect it to be significantly more than the standard GLS. The company says deliveries will start in the second half of 2020. 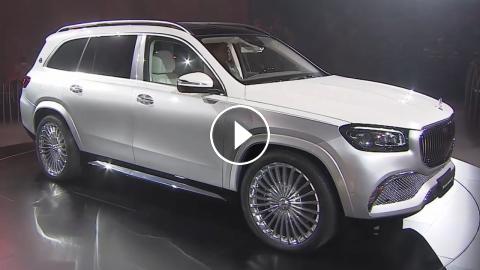 2020 Mercedes-Maybach GLS 600 4Matic Unveiled https://youtu.be/mDpg8lRU5c4Back in 2017, we heard a rumor Mercedes would built a Maybach version of its...