Of AMG's small dynamic duo, the A45 hatch might seem like the obvious go-to for performance – but the new 2020 Mercedes-AMG CLA45 may just surprise you.
Believe it or not, the original Mercedes-AMG CLA45 outsold its better-known A45 cousin in Australia. This fact may initially puzzle, but when you really think about it, it makes perfect sense.

Even more so now, with this significantly better-looking second-generation 2020 Mercedes-AMG CLA45 S that packs a hell of a punch.

Why would you buy a CLA? The idea behind this offering, of course, is that you feel you’re not old (or boring) enough to buy a regular sedan, and not young enough to still own a hatch.

The regular Mercedes-Benz CLA is a very mature choice for those still young at heart and, as such, remains a hugely popular choice in Australia, having found a sweet spot for our taste.

To give you some idea of the CLA’s popularity, just consider that it outsells the BMW 3 Series and Audi A4, so why wouldn’t Mercedes give it to the crazy folk at AMG to make it a bit more special?

To be fair, yours truly found the previous-generation CLA rather vulgar and, well, somewhat unattractive (to be kind). With the new-generation (review here), I feel the design has really matured and become universally appealing. The new rear lights really help make the CLA feel a lot bigger and more substantial than it really is.

Now, the new CLA45 doesn’t arrive in Australia until the first few months of 2020, and as such we also have no local pricing or equipment details yet. So, to check it out in the flesh, we flew all the way to Spain to sample a selection at the Jarama race track.
he first thing you’ll notice when you lay your eyes upon this new AMG is its angry look. The hardcore CLA45 takes an already attractive package and beefs up big time. With a wider track, bigger and wider wheels and massive 360mm six-pot front brakes, it’s hard not to notice it.
Starting from the back, the four 90mm round tail pipes signal the CLA45’s intent. Unfortunately, they are a little limited by how much noise they can make, thanks to new European regulations. And, as a matter of fact, the CLA is quieter than the A 45 due to its shape and underbody design.

There is a very limited number of ‘crackles and pops’ on lift off, and the sound is pumped through the cabin – we're told it's not fake, necessarily, but the actual sound of the exhaust ‘enhanced’. Thankfully, a good aftermarket exhaust system will fix the issue.

Those exhausts are further aided by the noticeably angry rear diffuser. There is an option for an aero pack which adds some tack-on bits and a rear spoiler, plus some air-flow systems to the front, it’s hard to say if you need it or not for aesthetic reasons, but it does look pretty good without it. 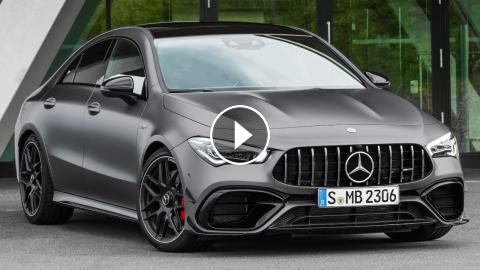