The refreshed GLC 350e is not the only plug-in hybrid Mercedes is unveiling ahead of the Frankfurt Motor Show as the Daimler company is also taking the virtual wraps off the bigger GLE 350de. It’s an interesting proposal in the midsize premium SUV segment in Europe due to the nature of its powertrain as it uses a turbodiesel engine taking the shape of a 2.0-liter four-cylinder unit.

The internal combustion engine produces 194 horsepower and works together with an electric motor rated at 136 hp. With the two joining forces, the electrified GLE offers a combined output of 320 hp and an ample 516 pound-feet (700 Newton-meters) of torque. The beefy PHEV setup grants the GLE 350de with a sprint to 62 mph (100 kph) in only 6.8 seconds en route to a top speed of 130 mph (210 kph) if the ICE is used or 100 mph (160 kph) when using just the electric motor.
Thanks to a rather large 31.2-kWh battery pack, the electrified SUV will do 99 kilometers (61.5 miles) running solely on electric energy based on the WLTP cycle. On the flip side, the batteries do eat into the amount of luggage space available, with the cargo capacity dropping from 2,055 liters (72.5 cubic feet) to 1,915 liters (67.6 liters) with the seats folded. That’s a compromise worth marking considering the loss is not that significant.

Once the battery is depleted, it’ll take just 20 minutes to charge it from 10% to 80% or 30 minutes from 10% to 100% by using a DC charging station. From a wallbox, it'll take 90 minutes for a full charge while from a conventional power socket it will require about five hours. There's going to be a 7.4 kW onboard charger and regenerative braking to juice up the battery while on the go. If you plan on doing a lot of towing, Mercedes says its diesel-electric GLE will be able to haul up to 3,500 kilograms (7,716 pounds).

The GLE 350de is part of Mercedes’ PHEV onslaught, with more than ten plug-in hybrids to be available by year’s end. That number will more than double by late 2020. Meanwhile, the two new electrified SUVs will be on display later this week at the Frankfurt Motor Show where we’ll also see the zero-emissions Vision EQ S concept. 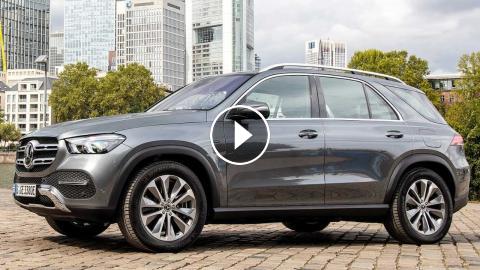