The all-new Mercedes-Benz GLB SUV is destined to slot between the GLA and the GLC later this year. The GLB is boxier than those SUVs, with a trend-bucking rugged, upright appearance. As the U.S. auto market has shifted away from cars toward SUVs, Mercedes is using the GLB to expand its own offerings by filling in small remaining niches among its existing, traditional SUVs.

The GLB will be offered in five- and seven-passenger configurations, by way of an optional third-row seat, despite its compact dimensions.
The overall dimensions are quite similar to a Honda CR-V. It's 5.1 inches longer than the GLA but 1.7 inches shorter than the GLC. The design looks like an evolution of the sharp-edged GLK, which was the predecessor to the more rounded GLC.

Mercedes says body cladding and other touches, such as door seals, were designed with dirt-bound adventure in mind. Looking beyond the marketing spin and the over-dressed concept version that made the show circuit rounds earlier this year (see below), this GLB looks classy but no more rugged than a Kia Telluride.
The GLB will be offered in two- and three-row configurations, a rarity among compact luxury SUVs. The second-row seats can be moved forward up to 6 inches to better accommodate passengers and cargo in the back.

Third-row passengers have cup holders, storage compartments, and USB type C ports, which are newer and smaller than most familiar USB ports.

The dash is dominated by what looks like a single wide screen that stretches across the dashboard for the instrument panel and infotainment system. (It is a pair of 7-inch screens positioned together.)

Its infotainment system is the Mercedes-Benz User Experience, which is used in several other current models from the automaker. MBUX is distinguished by its ability to learn and proactively respond, such as adjusting climate, music, and even navigation, based on past observations and current conditions. It responds to natural language commands, activated by saying, “Hey, Mercedes.” It operates much like Alexa or Siri voice assistants. 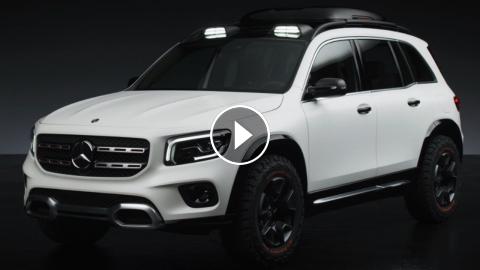