The latest high-riding coupe from Mercedes-Benz will be touching down in Australia during the second quarter of 2020.
Mercedes-Benz has revealed its latest rival to the BMW X6, the GLE Coupe, ahead of its debut at the Frankfurt motor show in September.

Based on the wagon-bodied GLE just released in Australia, the GLE Coupe blends familiar underpinnings and engines with a sloping roofline and shorter wheelbase for an overall 'sportier' drive.

Measuring up at 4929mm long and 2010mm wide, the new model is 39mm longer and 7mm wider than the model it replaces. The wheelbase is up 20mm on the outgoing model, too, although it's a whopping 60mm shorter than the regular GLE.
The nose is essentially identical to that of the 'wagon-bodied' GLE, but the roofline slopes dramatically away towards the rear, and the coupe has more pronounced hips over the wheel arches.
Mercedes has reinterpreted the tail-lights from the CLA and CLS, adding in the two-piece LED internals from the regular GLE for a dash more continuity between the two models. The bootlid features an integrated lip spoiler, and the number plate mount has been relocated from the boot to the rear bumper/diffuser section.

Wheels ranging from 19- to 22-inches will be offered, sitting flush with the slightly pumped-up arches.
Inside, the front of the GLE Coupe's cabin is identical to that of the 'wagon'. That means the driver is faced with two widescreen MBUX screens, while the broad centre console houses a touchpad and off-road controls.

Boot space is 655L with the rear seats in place, while folding the rear bench frees up 1790L, up 70L on the outgoing model. There's now space for items up to two metres long and 1.08m wide, both improved over the now-defunct model. With that said, the regular GLE offers 825L with its second row slid all the way forward.

The standard suspension system is a steel-sprung setup with sportier tuning than the regular GLE, but air suspension is available as an option. It's a self-levelling system, which means heavy loads don't give the car a droopy bum, and can constantly vary its stiffness based on the conditions.
A system called 'e-active body control' is also available, capable of adjusting the spring and damper rates at each wheel individually. It's capable of resisting body roll, squat and dive, with Mercedes-Benz dubbing it the "world's most intelligent SUV suspension".

Two engines will be offered at launch in Europe, both inline six-cylinder diesels. The GLE350d makes 200kW and 600Nm, while the GLE400d outputs 243kW and 700Nm. Regardless of trim, the engine is hooked up to a nine-speed automatic transmission and 4Matic all-wheel drive. 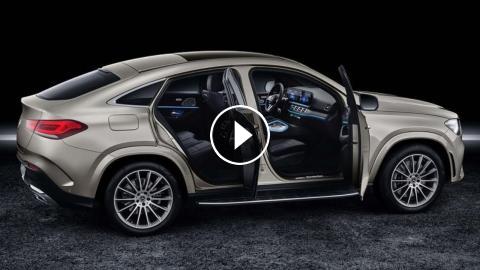